Home » Blog » Convert a used diesel engine? These are the possible applications

Convert a used diesel engine? These are the possible applications

A second-hand MTU engine can be used for different purposes, e.g. in dredging vessels (or sand dredgers) or as a power generator. But MTU engines are also very well-suited as marine engines. Hahebo sold one unit, for instance, that was fitted to a Greek tourist boat.

A second-hand MTU engine is perfect for use as:

Used MTU engines are very well-suited as marine engines. They are therefore often used to replace a defective original marine propulsion unit. A boat at sea has to absorb a lot of buffeting from the waves on open water, which makes a robust engine a necessity. The four-stroke MTU engines that Hahebo acquired from the Austrian Ministry of Defence are known for being ‘virtually indestructible’. This heavyweight – this beast weighs no less than 1,550 kilos – is perfectly at home in a boat.

PROPULSION UNIT FOR A DREDGER VESSEL

Dredger vessels – or sand dredgers – are known as ‘heavy boys’ that require heavy propulsion units. With its robust appearance, an MTU engine is the perfect match. This engine is very powerful and is often used for such systems. One major benefit of an MTU engine is that it can withstand the effects of water, dust and sand. Second-hand MTU units are often used in dredger vessels, as their pricing levels makes them an interesting option.

A diesel power unit is a combination of a diesel engine and a generator. A generator is a machine that converts mechanical energy – input via a rotating shaft – into electrical energy, i.e. current. The rotating shaft is driven by the diesel engine. Generators are often used where there is no access to the power grid, such as at events. But they are also used frequently as emergency power units.

A second-hand engine – for example an MTU engine – is commonly used for a power generator, as it represents a cheap solution. The purchase of a completely new generator means a price that is often many times higher.

Want to find out more about second-hand MTU diesel engines? Or are you considering buying a used MTU engine from Hahebo? Then check out all the product information and let us know if you are interested. 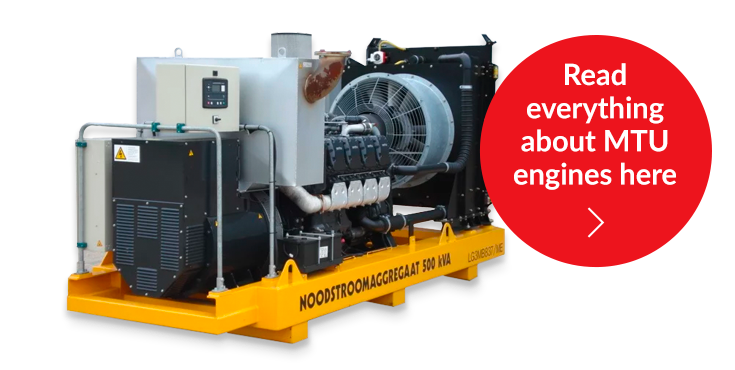